This is the  second in a two part series written by Savannah Jackson; ed. assistance by Nancer Ballard. 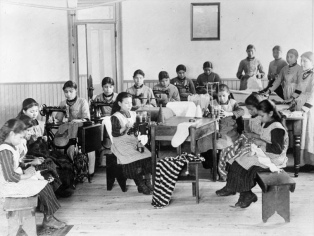 Students at a residential school in Fort Resolution, Northwest Territories.

In our most recent post, we examined the experiences of indigenous children within the Canadian residential school system. The practice of involuntarily removing children from their communities and cultures, which formally lasted for 165 years, fundamentally altered the lives of indigenous people and their communities. Our last post used the Heroine’s Journey as a framework in the attempt to better understand some of the impacts on survivors and the processes by which indigenous people were intentionally stripped of their identities. In this post we will use the Heroine’s Journey to approach the healing process.

The “history” of the residential schools does not have a beautiful, cathartic, final moment that marks the completion of indigenous people’s traumatic journey. A single monetary payment or moment of clarity cannot suddenly rectify what is now almost two centuries of hurting. The heroine’s journey is a cycle of stages that can occur non-linearly and can be passed through more than once.

Though the residential school practice officially ended in 1996, another decade would pass before the survivors received a formal apology from the Canadian Prime Minister Stephen Harper. (See statement here). PM Harper’s acknowledgement that the federal government has caused lasting harm to survivors, family members, and communities was an important moment of recognition and apology. Harper also established the Truth and Reconciliation Commission (TRC) at this time; it is composed of both indigenous leaders and nonindigenous members. Seven years later, in 2015, the TRC officially declared the residential school system to have constituted cultural genocide and issued a list of 94 “Calls to Action” for how to move forward with reconciliation and reparations. The Calls to Action include such things as eliminating the discrepancy between educational funding for aboriginal schools and non-aboriginal schools; calling upon the Canadian government to acknowledge that Aboriginal rights include Aboriginal language rights; and providing adequate resources to social workers to help keep Aboriginal families together.

Indigenous children at the Fort Simpson residential school in the Northwest Territories.

Progress has been slow, and a large amount of work remains to be accomplished. As of March 2018, only ten of the TRC’s 94 proposals had been completed. Harper’s 2008 apology did not include survivors in Newfoundland and Labrador because the residential schools in this province were not directly managed by the Canadian federal government when the schools were opened (the province did not join Canada until 1949). This apology finally came with Prime Minister Justin Trudeau’s statement in November of 2017. Although Catholic missionaries, priests, and nuns were instrumental in establishing and teaching in residential schools, in March of 2018, Pope Francis decided not to apologize for the role of the Catholic church in the residential school system.

“You know they were trying to tell me that’s this church, or this place we’re in, you know, I had to do, I had to be this perfect, perfect person or whatever. And yet at the same time, that’s not what I saw. Because I thought to myself, well, if you’re a priest and nun, how come you’re doing this to this child, or you’re doing this to me, and I would say it out loud, and I’d get more lickings.”

The Canadian government’s formal recognition is an important first step, but first steps are just that—they are not the journey’s end.  Many questioned Harper’s 2008 apology when only a year later, he stated at the 2009 G20 Pittsburg Summit that Canada has “no history of colonialism.” In September of 2018, students at an Alberta school were asked on a multiple-choice exam to name a positive effect of residential schools on indigenous children. This is like asking one to identify the benefits of false incarceration. It is not indicative of a society in which both indigenous and non-indigenous people have embraced the process of healing, which requires a long-term collaborative effort.

The Canadian government continues to negotiate settlements and reparations with indigenous individuals as well as working toward providing adequate funding for schools on reserves. Indigenous communities continue to be at odds with the Canadian government in the effort to achieve reparations that truly respond to survivors’ and communities’ needs. 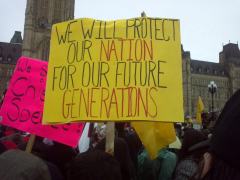 Individual reparations alone do not address the deeper level of the persisting trauma. Individualizing reparations fails to acknowledge that the survivors are both individual victims of violence and group victims of a dominant group’s systemic dehumanization. Reparations and healing must consistently recognize and address both.

The heroine journey framework emphasizes that healing is not an oppositional dichotomy between natives and settlers in which natives reclaim their cultural identity simply by convincing settler that they deserve respect. Nor can settlers atone for the natives’ traumatization with one apology and a donation.  The heroine’s journey is a one of non-linear movement toward wholeness. Attempts to erase what has been done or purchase forgiveness doubles the initial violation and continues to marginalize indigenous peoples. Healing is not what the federal government determines to be adequate or affordable funding according to non-indigenous standards.

We cannot alter the past injustices suffered by indigenous people faced through the residential school system. However, we can continue to recognize what has happened and to address long-lasting and multidimensional impacts honestly and empathically. We must  consistently be aware that healing from trauma is neither linear nor subject to a quick fix. And we must not let this, or other similar things, happen again. We cannot participate in the healing of communities and their members while also treating them as separate and other. To  heal the split between the original and dominant cultural identities in the pursuit of wholeness, we must listen to the requests and needs of indigenous communities and incorporate both the experiences of the survivors and the role of the dominant culture in survivors’ experiences into our consciousness.

“That’s our belief as First Nations that we don’t just think about ourselves. We have to think of the next generation and the ones yet to come…They’re not here yet, but we have to prepare for them. And preparing means we’ve got to put down that hurt and that pain we carry now. We can’t let that be our life.””

For more information on the history of the residential school system, and the indigenous experience and perspective, you can visit wherearethechildren.ca/en